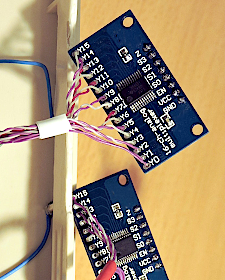 57
subscribers
goals
55 of 200 paid subscribers
Will start the extended version of RSC firmware that will support the "sub-master" board, which will have mainly the same I/O features as master bo..
Available to everyone
Sep 22 14:02

Parameter database/keywords:
Now about 300 default parameters for switches in the RSC database use the same keyword for the switch and the corresponding LED, which can also be reassigned as custom in the converter.
Configurator:
I have extended the configurator  in terms of more flexible structure  of  aircraft maps. Take a look at the B738 mapping, which I am currently completing, as an example. I will also continue to add mappings, at least for those aircraft that have conversion files available for public download.

Laminar B738 (Zibo):
The built-in Laminar B738 Zibo conversion has been renewed. Now all  MCP displays as well as overhead displays (Landing ALT / Flt ALT) are  working properly, maintaining test mode - when you activate the light  test switch, all displays flash with 8888 pattern, respectively for each  display format. The same is done for the default Laminar B738.
Other Conversions:
As I have bought several plane models (including the X-Craft  Embraer family, Toliss A321, Morava, Twin Otter, etc...) I will work on  the conversions for these models, all them  will be available for download  and probably later will be built-in into SimVimX database by default.

Currently, I'm preparing my full conversion for the Toliss A321 model, with correct and tested data conversion accordingly with the assignment map.
The changes briefly described above are made in accordance with the updated SimVimX  plugin, please read the update log on the SimVimX website or Roman's Boosty page.
configurator
converter
zibo
0
Creator has disabled comments for this post.

750 ₽ per month
+ chat
The subscription level includes access to a private chat in Discord
© 2021 My.com B.V. All rights reserved. All trademarks are the property of their respective owners.
Our blogTerms of usePrivacy policyBrandSupport
EN